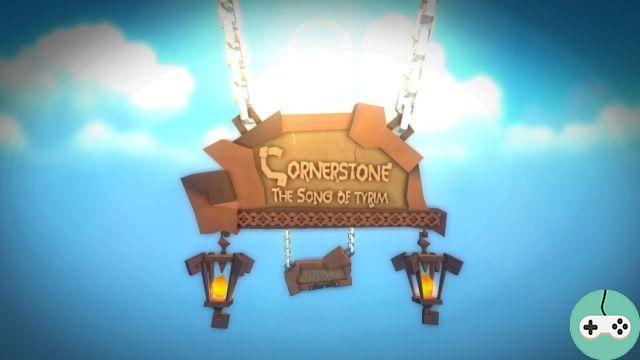 Cornerstone: The Song of Tyrim is a new adventure game available for Windows, Mac and Linux set in a fantastic open world.

The part begins with a rather atypical interface created on real elements. So the title of the game is a sign attached to chains. 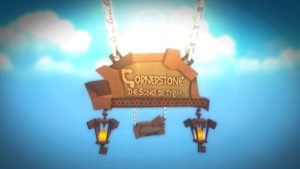 Once the save location has been chosen, a cutscene presents the situation. To put it simply, the men from the village of Borja have been gone for several weeks. Women and children start to worry so our hero, Tyrim, decides to take matters into his own hands and investigate. The first quests aim to introduce the mechanics of the game. The character can move forward, run, walk in stealth mode and grab objects. Controls are available from the keyboard or controller, depending on what you prefer. For my part, I opted for a joystick control that I find more appropriate for this style of play. 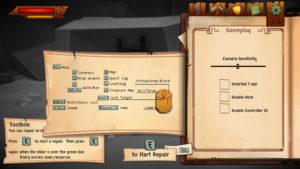 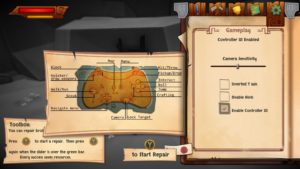 A very complete crafting system is offered and most of the puzzles to be solved to advance in the adventure are based on items to be created. Thus, the first object to be created is a cube which is used to climb higher. The torch is an element to be manufactured regularly to be able to ignite spider webs, defend against special monsters or even light the hearths of houses. Many objects can be used in the world: furniture or cubes, very useful in case of lack of cubes, fire to light your torch, rocks to throw ... It is finally possible to repair others. 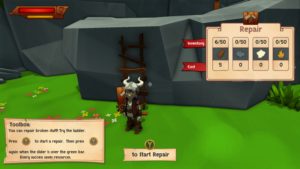 There are also vehicles. The first is a parachute which allows a slow fall and access to high places (typically the roofs in the village). A little later in the adventure, I have access to a small boat that will allow me to explore other islands (eight islands are available)! 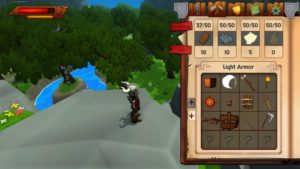 Each item requires components to be crafted (wood, stone, wool, and fire) to be collected in the world. Usually it's not that hard to find (at least on the main island), you just have to wander around it a bit and explore the wide world. 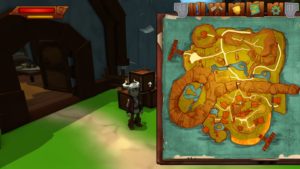 Subsidiary quests and hidden places are to be discovered everywhere, such as this space accessible by jumping over small mountains, this cave under the waterfall, or even this crypt closed by rocks to explode ... Most of the time, there are either components or diagrams to create new objects.

Be careful, however, in an idyllic aspect, this world is dangerous, so you have to defend yourself! To do this, you have to create a weapon (pick, wooden sword, ax) or recover it from the bodies of dead enemies (even if this necessarily requires having successfully killed one beforehand). Defense can be enhanced by creating armor and shield. The shield must be raised by pressing the dedicated key at the right time. You must also be careful to be correctly oriented so that the shield effectively takes the damage. Managing sustainability requires changing equipment from time to time, and all items brought home disappear when the character dies. 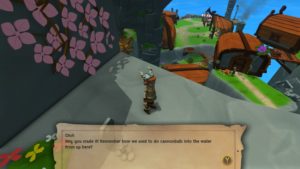 Fortunately, the resources do not disappear, so it is possible to quickly recreate your objects as long as you have a little stock. Note that there is no inventory, it is only possible to have one created object in hand (it is necessary to put down your sword to have a torch) and that you must therefore remember where you have left your weapon and be careful in these moments when you are walking around helpless. Flowers that attack on sight are deadly, especially if there are several of them: you must try to attack from the back. Regarding the spiders that fall from trees and drain all life, I have not found a solution except to avoid walking under trees where there are cobwebs. 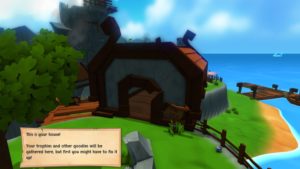 Some bugs unfortunately remain in the tested version, spoiling the fun a little. Sometimes the torch flame remains at a change of zone, sometimes not. I also had my weapon which had disappeared after a load, as well as several stages of completing a quest (the world had been reset). Other times, the character does not strike the enemy who on the contrary chains the attacks. The camera sometimes does strange things, especially during dialogues. I also had a totally blocked NPC who suddenly did not want me to return the quest (luckily, nothing blocking because it was a side quest). Finally, the stacking of cubes is sometimes a little random when you want to stack two blocks to make a staircase. 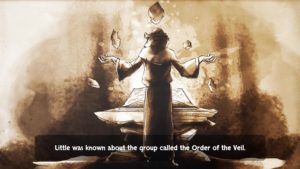 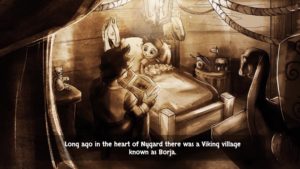 Despite everything, the adventure remains pleasant and I had a good time in the company of the little Viking full of good will! If you like adventure games, and aren't afraid of the somewhat random behavior of the physics engine, then go for it.

Add a comment from Cornerstone: The Song of Tyrim - A Viking Adventure