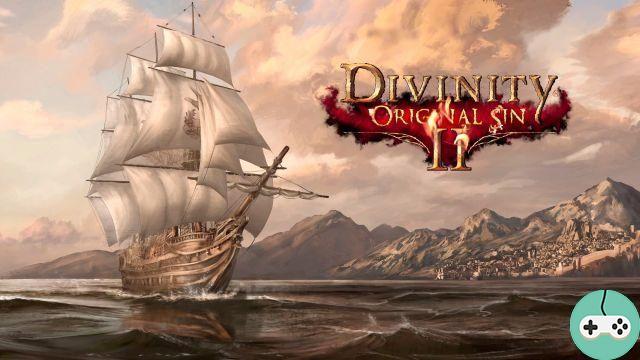 Divinity: Original Sin 2 is an RPG developed and published by Larian (published by Bandai Namco for the console version), initially released on September 17, 2017 on PC, and available since August 31, 2018 on PS4, Xbox One and PC in version " Definitive Edition ”.

Several years after the death of Lucian the Divine, the designated champion of the Gods, the world is going badly. The latter is continually attacked by mysterious creatures that ravage everything in their path, the Destroyers. They are drawn to Source, a particularly powerful form of magic, which only Sorcerers can master. Following these revelations, the Order of Paladins and Magisters decides to hunt down all the Sorcerers and prevent them from using their power so that the Destroyers can no longer come.

This is how the story begins. While we have been captured, we are on a boat sailing towards Fort-Joy, an island used as a prison to lock up and control the Sorcerers. But during the trip, our ship is attacked by a gigantic annihilator and we sink. As we sink with the ship and are on the verge of death, a strange light appears, and a voice tells us that it is not yet time. We then find ourselves stranded on a beach in Fort-Joy, and that's when our journey begins! 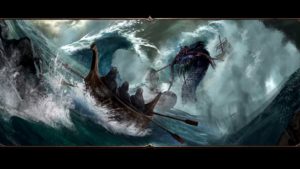 This is just the synopsis of the game, it's difficult (if not impossible) to say more without spoiling the storyline. Like any good self-respecting RPG, the story is very important, and above all very developed. Throughout the adventure, many mysteries unveiled, surprises, twists and turns will be present. Some may be "easily" anticipated, especially if you read all the documents carefully. As for others, they will be real blows to the head when they occur. In addition, although the story is a bit long to start, the first part of the game will mainly focus on the Fort-Joy escape, and few revelations will be given at that time. This works out from the second part of the game and lasts until the very end.

One of the strengths of the DOS: 2 storyline is that it is possible to play “original” characters. These all have a personal history (more or less linked to the main scenario) and different from each other; moreover, they evolve throughout the adventure. Of course, it is also quite possible to create a "house" character, this will not detract from the game and will not prevent you from enjoying it, but you will not have a personal quest. 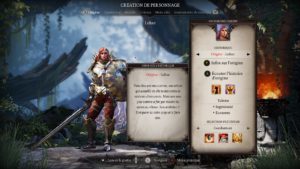 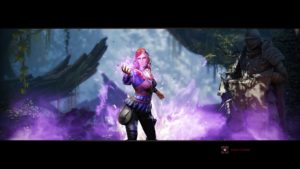 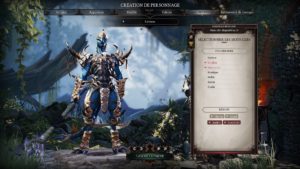 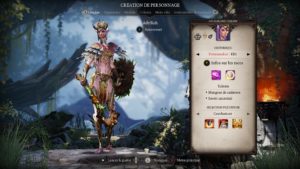 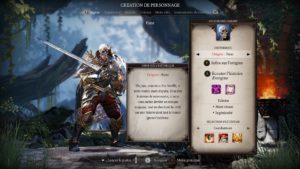 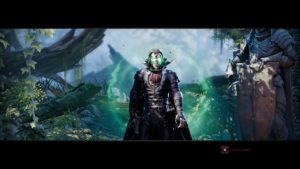 DOS: 2 is therefore an RPG, with tactical turn-based combat. The main strength of the game is that you are completely free to do whatever you want, to play as you want, when you want. Do you want to be a paragon of virtue, save absolutely everyone (or at least try to do so), do all the characters / animals you meet a favor? It's possible. Want to be a real motherfucker and a low morale shit? It is also possible.

You can really do anything, search absolutely everything, pick up anyone's pockets, kill animals, children (yes if ...), the merchant whose head does not come back to you, and even characters from the main story (although for some, you may drool over them given their power! But it is possible!). This is also accompanied by the fact that when you play alone, your companions will be able to react to your actions.

Some will approve of you, others will not. This has a very important impact, because they can end up leaving you, or even outright turn against you and attack you. Conversely, they can also support you, back you up and see you as a real leader. 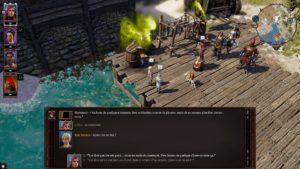 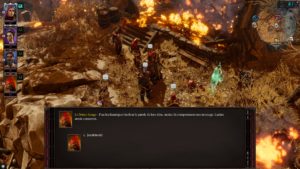 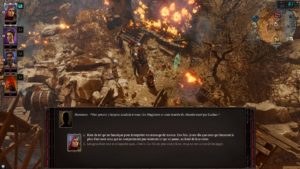 It gets even bigger if you play in co-op (up to 4 players). You can play and move forward together, or go on your own and do your little business each on your own to join you only during big fights (or not!). You can even betray and attack yourself, kill your friends and continue the adventure without them.

The game attempts to (successfully) approach the experience of a tabletop RPG from a freedom of action point of view.

It also goes through the dialogues. Each dialogue offers different answers, depending on the character speaking, their knowledge, but also their past actions. On the other hand, if you behaved like a hero, you will be able to obtain the “hero” tag, which allows you to unlock special responses related to this. 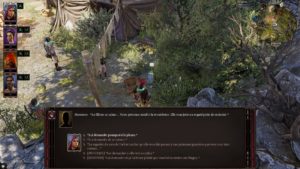 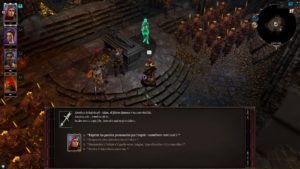 As for the fights, they take place on a turn-based basis. The fights are tactical type fights, during which you can move your characters, with predefined action points, etc. These seem simple at first, due to lack of skill, but become more and more tactical as we evolve (and as enemies evolve too!).

The enemies (and you) have a life bar, but also a physical armor bar and a magic armor bar (independent of each other). To inflict statuses (bleeding, freezing, etc.) it will be necessary to completely remove the corresponding armor. If you want to bleed the enemy, you will need to reduce the physical armor of the target first. If you want to freeze the enemy, you will have to reduce their magic armor.

The same goes for the life bar, which can only be used after one of the two armors has been reduced to nothing. Your warrior, who hits with a physical skill, will have to destroy the enemy's physical armor in order to be able to deal damage to his health bar. A mage will have to destroy the target's magic armor to reduce its life bar. Of course, not all enemies will have the same amount of physical and magical armor. A magician will have a very large magic armor, but a very weak physical armor while for a warrior, it will be the reverse. 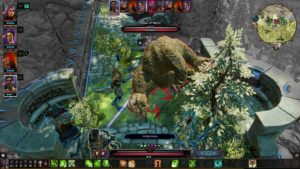 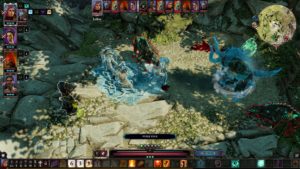 The strength of the fighting comes from the interaction with the setting and between the elements. If a character is in a puddle, you can cast a lightning spell to electrify the water and inflict damage on the enemy in it, even crippling them. Likewise, you can launch a fireball to turn water into a cloud of vapor, in order to reduce the visibility of the enemy, and then launch a bolt of lightning at the cloud to electrify it and thus, inflict damage and damage to the enemy. paralyze him. Or you could have cast an ice spell on the puddle to freeze it, this can freeze the enemy or cause them to slide if they try to move.

However, you have to be very careful, because all this affects enemies as well as you and your allies! 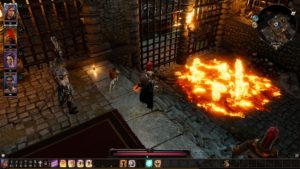 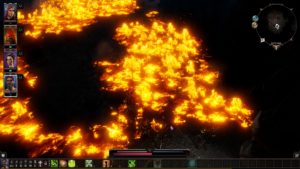 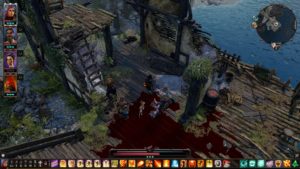 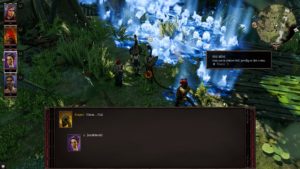 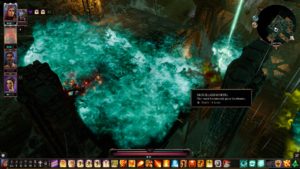 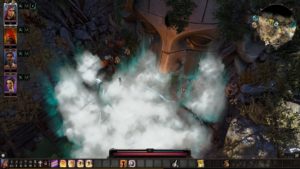 On the graphics and optimization side, the game is available in 4K. On PC, the game runs smoothly in 4K at constant 60FPS (even in "windowed borderless" mode) on an average configuration (i3-8350k , 16 GB of RAM and a GTX1070). On my DE part (about 90 hours), I had no problem, slowdown or drop in IPS, even when there are a lot of effects (especially explosions) on the screen. On the other hand, watch out for backups. These are quite heavy from a moment (especially from the middle of arc 2). If you have the Cloud enabled and a weak connection, it may take a while to upload them. For your information, my solo part (only one save, honorable mode), weighs 335 MB!

The game with the controller is very well thought out. I even adopted the controller when playing on PC, the interface being much more practical in some cases, such as being able to select several items at the same time from the inventory to move them, sell the items directly without having to go through through exchange, etc.

Changes made by the Definitive Edition

The game has undergone some redesigns, additions and balances via DE.

First of all, trade. The vast majority of items have had their prices changed, to better match what they are, or how much of the equivalent items are sold. This mainly concerns armor and weapons, but also “gold” objects (plate, cup, etc.).

The other point concerns the rebalancing of the rise in level (and in power), as well of the characters as of the enemies. In the classic version, there was a big cap at level 13 for example (but also present at level 9, 16 and 18), with a big leap forward in terms of power for the enemies. This cap has been revised downwards, as has the amount of experience required to advance to the next level.

The biggest overhaul concerns the game's final arc, taking place in Arx. One of the main changes is the complete overhaul of the dialogues and the flow of certain quests, considered too "difficult" and "complex" in the classic version. Persuasion has also been revised downwards: in the classic version, it sometimes took 7 or even 8 points of persuasion to succeed, now (from what I have personally seen) the maximum persuasion required is 6.

Regarding the gameplay, many spells and techniques have been changed, especially with regard to the cost. The “Lone Wolf” attribute has also been reworked (down), in order to make the game much more difficult in this mode.

Artificial intelligence during combat has also been reviewed. The enemies are more "intelligent" and tactical.

And a lot of other things (the patch-note is 53 pages!)

Divinity: Original Sin 2 - Definitive Edition is the consecration of the opus. The game is still great to play, the gameplay possibilities are very important. The multiplayer mode is as exquisite as ever, giving players complete freedom. The replayability of the title is quite simply enormous, between the discovery of the different "origins" stories (and the different paths / possible conclusions), the fact of being able to carry out the quests as we see fit, to kill (or not!) Who it is. we want, etc. Even the main storyline has several "base" endings, and several additional character-related endings. The game also has the option to create its own adventures and have your friends play them, like a tabletop RPG. Unfortunately, this game mode is not available on console.

In short, if you are looking for a role-playing game bordering on perfection, jump to DOS: 2!

add a comment of Divinity: Original Sin 2 - Definitive Edition - The ultimate edition of the ultimate RPG!