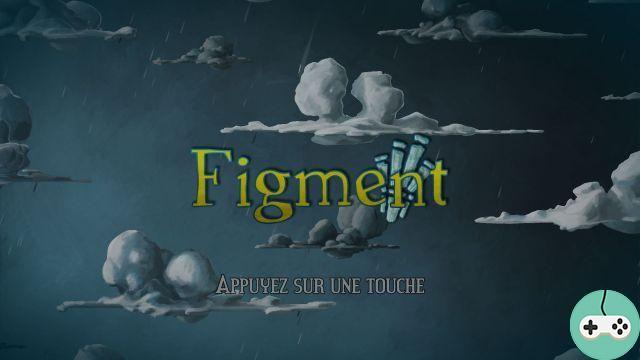 Discovered during Paris Games Week, Figment is a nice adventure game with a big place for music. 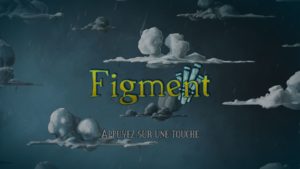 The part begins with a drama that takes place off-screen and that we only follow through dialogues and sounds. A family is in a car, they are talking. Suddenly, the father exclaims, brake noise, a collision, screams. An accident, but what happened more exactly? Difficult to say, because the screen then takes us into an imaginary world, a very cute and colorful scene where a strange character named Dusty is quietly dozing on the terrace of his house. As we find out soon after, we find ourselves in a mind filled with desires, memories and fears. 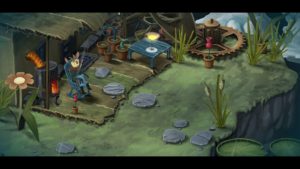 Far from realizing what happens when the adventure begins, Dusty has a serious problem: his drink is hot! He urgently needs ice cubes. To do this, you have to restart the ice machine, an excellent opportunity to present the mechanisms through a simple and quick puzzle. 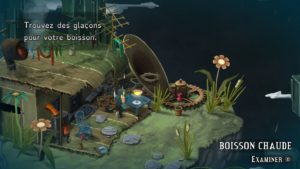 The character moves on the keyboard, preferably American. He is able to interact with certain elements of the decor, those that shine slightly, with the E key, possibly by combining them with elements from the inventory that opens with Q. 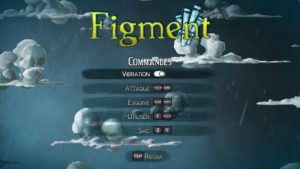 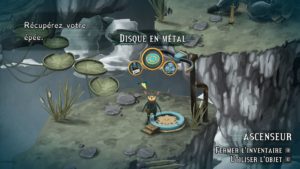 Once his sword is recovered, Dusty is able to defend himself (Ctrl or left mouse click) and dodge (Space or right mouse click). Here are all the controls, nothing else to remember to enjoy the adventure and unravel all the puzzles in pursuit of nasty nightmares. Because when our character was looking for ice cubes, a villain seized his precious photo album. 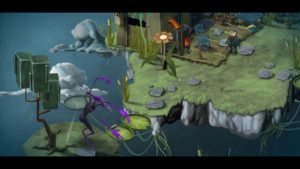 Motivated by this absolutely inadmissible situation, Dusty gradually becomes who he once was, the voice of courage, in his fight against the nightmarish creatures that haunt this once so calm and silent place. He is accompanied in his quest by a bird, Piper, an eternal optimist.

This spirit world works thanks to batteries of different colors which are removable. The principle therefore consists in transporting its batteries from one place to another while respecting the color code. Obviously, by removing a battery on one side, this generates consequences such as a pencil bridge that retracts, a catapult that no longer works or a dragonfly-fan that stops, which can block progress. Suddenly, we must constantly think about the means that exist to circumvent these changes in the state of the world. It is also the same principle for elevators which work with transportable metal disks. 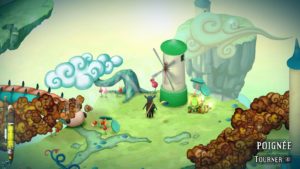 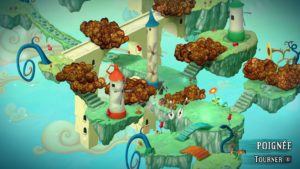 Here and there, handles and knobs are to turn and activate. As it wouldn't be funny, many elements are missing, so you have to explore, in an increasingly complex chain of things to do and varied tasks to accomplish (I need the handle here, so I have to collect the seed there to do push the plant bridge, but the seed requires water, so I have to open the valves of the mill, except that the battery is on the other side ...). 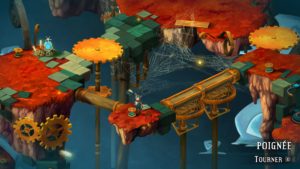 And it was more difficult than it seems to succeed in pushing this crate on this scale when it is impossible to jump over it! 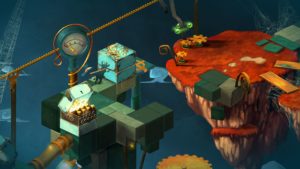 Some puzzles provide the opportunity to create unique, very poetic moments, taking us, for a moment, into a precious moment of childish wonder. Like that big apple that shelters a worm preventing it from taking off. Dusty uses a fishing rod to extract the intruder before flying off to another part of the spirit world. 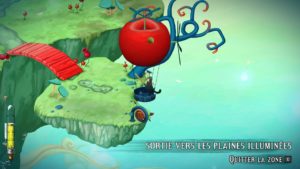 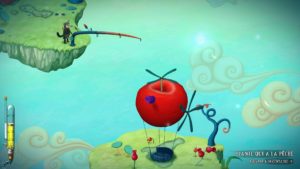 Nightmares cannot be caught without defending themselves, these bosses follow quite complex mechanisms, asking to interact with the scene. To spill water on the nightmare-plague, I must thus arrange for it to throw its bombs on the two flowers which allow it to dodge. After the flowers have wilted, he can only get down to one spot, the right time to use that filled top hat in a waterfall. Logical! 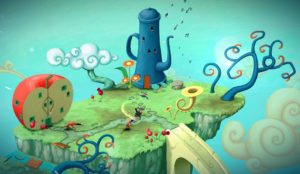 In their campaign of terror, nightmares are accompanied by little monsters. There are also aggressive parts of the scenery like the hands of a clock spinning at full speed on the quadrants I have to use to pass, pendulums on a bridge, flowers sending stinky balls, teeth falling from the sky ... 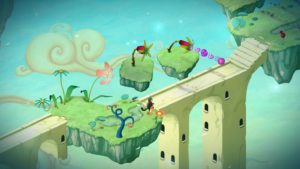 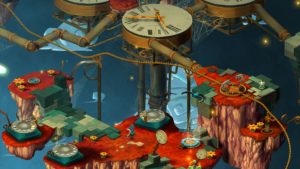 Overall, the difficulty is not very important, but the action makes it possible to spice up the adventure between phases of quieter reflections. Especially since balls of life are generously dispersed after the danger zones to raise the Dusty gauge. In the worst-case scenario, in the event of death, Dusty immediately reappears next door. The only consequence: the loss of gray energy which recharges on the left of the life bar and which increases the size of the green bar when it is full. 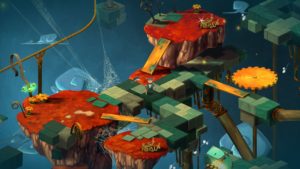 Contrary to what I expected with this title of "musical action-adventure game", the music ultimately serves little to solve the puzzles. Certainly, it is necessary at one point to recover the pistons of a trumpet to trigger a bellows bridge. Or there is still this strange tree for which you have to compose a melody. Overall, however, this is only fairly anecdotal. 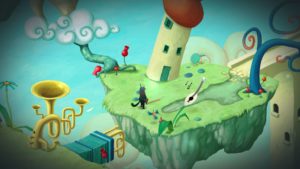 Music is in fact intrinsically linked to the game in its soul, its soundtrack, its sets, the ambient sounds ... And that in the most beautiful way, taking us from cabaret music to a brassy cacophony following the situations, in settings made of piano houses and trumpet trees.

The voices (in English only) are perfect, the Mayor speaks in verse, the bosses sing to the rhythm of their attacks and the dialogues between Dusty and Piper are tasty, full of humor. They guide us from time to time in the riddles with useful little thoughts (the one that has served me the most: "Hey, if we sent him those bombs that do not explode"). Special mention to the reflections of the inhabitants of the spirit world who respond when a knock on their door (and who moan regularly because their batteries are pricked!).

As it is very difficult to put words on this musical set, I invite you to watch the trailer which will show you all this in sounds and images:

Figment embarks on a colorful quest within a colorful spirit, high in color and sound. The environments are linked, with very different atmospheres between the right hemisphere (more creative and colorful) and the left hemisphere (more mechanical), in hand-drawn graphics and masterful original music. Two possible readings of this adventure: adults will understand the meaning behind these pretty drawings, while the youngest will enjoy a charming musical adventure. 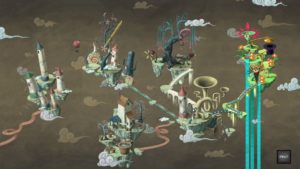 Beyond the main quest, there are also sixteen memories to recover, often hidden in the scenery, requiring you to accomplish a whole series of tasks to access them. As you can judge, I miss it a priori a lot! The world remains fully accessible at any point in history, giving collectors the opportunity to look back to find any missed item. 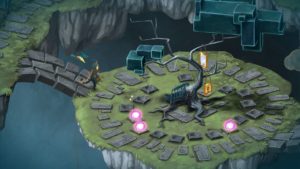 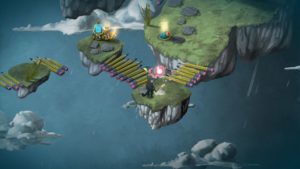 If you still have your baby soul and love beautiful adventures in music, then you will love to immerse yourself in the story of Dusty and Piper. Go for it without hesitation, I recommend it:

Add a comment from Figment - An Adventure in Music