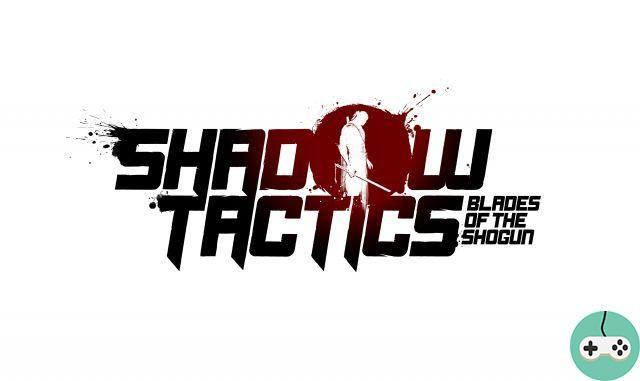 Shadow Tactics: Blades of the Shogun is an stealth game developed by Mimimi Productions and published by Daedalic Entertainment. 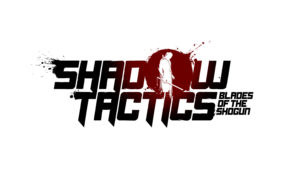 Shadow Tactics is a real-time tactical role-playing game (more commonly known as "commandos-like") which plunges us into feudal Japan at the controls of a small motley weightlifting group which will have to carry out a multitude of diverse and varied missions in discretion. the most total.

The game therefore immerses us in feudal Japan, at the time when the Shogunate has just taken place, and which already has to face conspirators wanting to overthrow it. The commander then decides to recruit a group to help him investigate and thwart the threat.

The story does not break a duck's three legs, but is more than enough to set up the universe and justify the missions that will take us to the 4 corners of Japan, in a multitude of places and even in season. 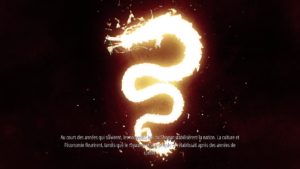 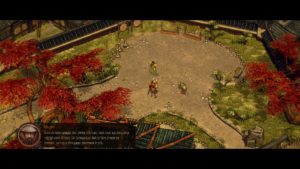 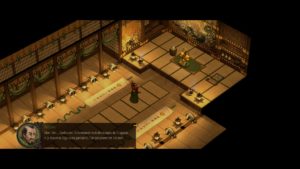 The game is composed of a total of 13 chapters which therefore take us through many different places such as the forest, fortresses, cities, etc., but also in different seasons which also play a role in stealth. In winter, snow will be your enemy, as your footsteps will let enemies know someone has been here and follow them until they find you!

During the adventure, we have four playable characters each with their own abilities and possibilities:

These five companions all have their place in the group and the synergy is felt. Each of them is complementary with the others and this makes it possible to set up many strategies and tactics in order to succeed in the missions. And tactics and strategy, that's what it will take to succeed!

The game does not forgive (almost) mistakes. A single mistake can lead to a game over forcing you to restart the mission or to reload from your last save. A real ordeal if you want to achieve bonus objectives such as doing the mission without saving and dying 2 minutes from the end, after spending 45 minutes planning and completing the mission. 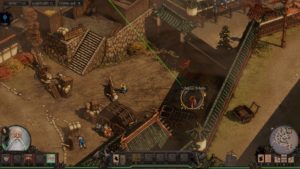 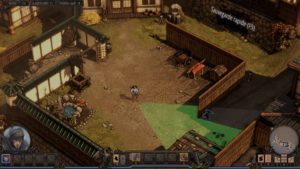 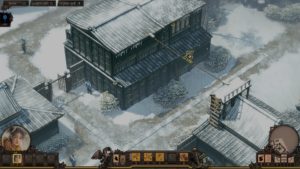 The missions offer many paths and possibilities of achievement. It is also possible to play as we see fit, entirely in stealth and without hitting any enemy, to pass discreetly by knocking out the enemies, but who will wake up after a few minutes or to play the stealth assassins by killing everyone. However, you will still have to be careful, because in the levels, not all NPCs are hostile! There are also civilians who will not attack you. On the other hand, they will give the alert if they see you. You can, of course, distract them, knock them out or even kill them if you want to.

In addition to the paraphernalia of the characters, it is possible to use the elements of the decor. Whether it's for distraction or killing enemies, there are plenty of ways to complete a mission without spilling blood on your own. It is possible, for example, to remove the chocks that keep a cart in place and push it up a slope so that it will crash into enemies below. Or scare an ox into charging and killing enemies, causing a rock to collapse, scaffolding to collapse, cutting the rope of a "crane" that holds planks, etc. Using the scenery is something not to be taken lightly, because unlike the use of weapons and items in the possession of our heroes, murders using the scenery do not trigger an alarm if there is has witnesses. If someone witnesses the death of one or more enemies via this method, they will certainly be alerted, will come to see what is happening and search around a bit, but will not trigger the alert and will not call for help. reinforcement.

In game, it is also possible to coordinate the movements and actions of your team. The "shadow mode" makes it possible to slow down time and plan movements and actions of the members so that they can perform them simultaneously. For example, it is possible to order a party member to distract two guards by throwing a stone while ordering the other two to kill the distracted guards. Once the orders are given, all you have to do is launch the action for everything to unfold automatically. Even though this sounds like an “overpowering” option, it isn't. Shadow mode requires planning and tactics just as "thorough" as giving orders manually. The slightest mistake can lead to the death of one or more characters. In addition, shadow mode only slows down the time to issue orders, so if characters are in the wrong place, they can get detected and killed while you are busy planning orders. 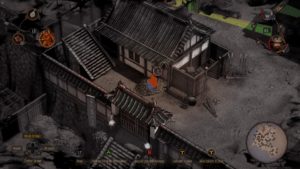 The game despite being very punitive is not impossible. In addition, it is possible to save when we want and resume exactly where we saved. In addition to that, each mission offers a lot of bonus objectives to complete, such as killing certain types of enemies, killing enemies in a certain way (accidents, melee, etc.) to complete the mission in a certain period of time, do not trigger any alert, complete the mission without having saved once, etc. Even so, the game “suffers” from a very strange difficulty curve. We go from very easy and quick missions to extremely difficult and complex missions, then we come back to simpler missions, etc. 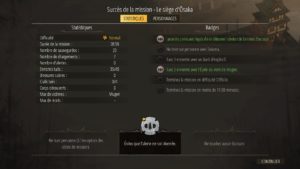 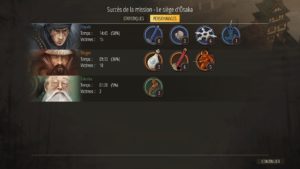 On the artificial intelligence side, it is well done and consistent. For example, if an enemy, who is in a group, is killed even without anyone seeing him, the others will go looking for him. As for the variety of enemies, there too has been work. It is indeed possible to distract enemies, for example, but not all of them are fooled. Some may be distracted by throwing a stone, but will not react to finding a bottle of sake while others will be the other way around. Others who will see a sake bottle on the ground may very well call and ask another soldier to fetch it for him. Some enemies are true Welsh Guards and will not react to any diversionary attempts and others will be outright impossible to assassinate and will have to be killed in "single combat" thanks to Mugen.

The vision also plays a very big role in the game. It is possible to see the field of vision of an enemy and the latter is divided into several zones. A “solid green” field of view, which is the soldier's normal field of vision, anything that enters the soldier is immediately seen and detected. (characters, footprints, object on the ground, etc.) and the second, for its part, is the "striated" field of vision, everything that is in this field of vision and which is in a squatting position or " rather low ”(corpse for example) is not seen by the enemy. The latter is often due to an element of the decoration such as thickets, a rock, etc. However, even if we can move our crouching figures without being seen, if we get up to kill someone, we will be immediately detected. It is the same if the enemy is killed from a distance, because he is standing and therefore visible to his colleague, his death will be seen by the latter. 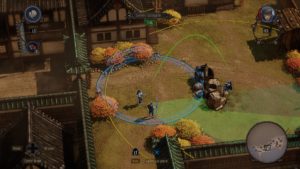 Shadow Tactics: Blades of the Shogun is a great and pleasant surprise! It had been a long time since a "Commandos-like" had seen the light of day, and even less of this quality. In addition, at a time when video games are intended to be very accessible, simple to see extremely easy, finding a game with difficulty and in which mistakes are not forgiving is very fun. It's not the kind of game you can do in a rush. The game also offers great replayability due to the many bonus objectives to be achieved in each of the 13 levels of the game which will require players to start over each of them several times and surpass themselves. (the bonus objectives are not visible the very first time you complete a level) The game itself, regardless of the replayability of the bonus objectives, runs between 20 p.m. and 30 p.m.

In short, if you like difficulty, if you are (like me) a big fan of the Commandos series released at the end of the 90s / beginning of the 2000s, this game is made for you and you will be wrong to deprive yourself of it!

Add a comment from Shadow Tactics: Blades of the Shogun - Commandos land in Japan